Most of us were fans of Little Town, the brainchild of Michael Sinensky and Sean McGarr in collaboration with Albie and Chris Manzo of RHONJ fame. The brand has been re-imagined as Little Town Social, which brings their orginal idea to the next level by moving the location a bit out of the tourist/frat-boy zone and more into a neighborhood spot. That’s not to say it’s dive-y, boring, or where you bring your grandparents. Anything but. Little Town Social operates on the key word “social,” where people gather over high-quality shared plates at communal tables or at the bar.

The former Village Pourhouse space at 205 First St. has been revamped into a sophisticated gathering spot with a more intimate feel involving dim lighting and warm tones. The bar is still 360 degrees with 32 TVs, and features a mix of classic and artisinal cocktails, such as the Ellen Arthur Cosmo (Absolut, Cointreau, passion fruit and lime juice), which I tried and was pleased that it was not sweet like a regular 90’s Cosmo. Guests have the option of 30+ beers on draft from microbreweries in addition to rotating seasonal specials. There is an extensive selection of bourbon, scotch, and tequila as well. 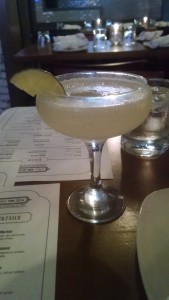 LTS’ menu is all about small plates and sharing, a concept that is not currently popular in Hoboken restaurants. Executive Chef Sarah Sproule is intense on the farm-to-table concept, sourcing everything as locally as possible and combining ingredients in innovative, flavorful ways.

The Ainsworth opens in Hoboken! 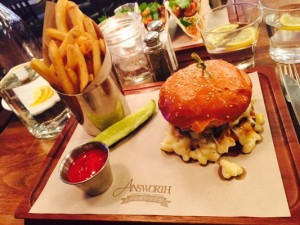 I usually leave Hoboken to the many people who operate Hoboken Girl and the various other blogs that report on the mile square, as I am a one-woman operation covering a much larger and diverse city.

But I am happy to do a favor for friends of Jersey City. Restauranteurs and former stars of Bravo’s The Real Housewives of New Jersey and Manzo’d with Children, Albie and Chris Manzo shut their doors of Little Town restaurant in Hoboken in January, and have revamped the entire space to open The Ainsworth, along with Michael Sinensky [Little Town, Hudson Terrace, Sidebar, Village Pourhouse] and the Paige Hospitality Group on 310 Sinatra Drive.

Those of you who frequent New York City have surely been to the Chelsea or Gramercy locations for brunch, an afternoon sports game or a late night. Hoboken is a a perfect fit for The Ainsworth prides itself on being a one-stop shop for brunch, lunch, dinner, cocktails and sports viewing.

The Hoboken concept, which opened in March, is an outpost of upscale steak, burger and sports gastropub, The Ainsworth. “We are thrilled to partner with Paige Hospitality Group and bring one of the best and most established upscale steak, burger, and sports gastropub brands in the country to the waterfront space in Hoboken,” says Albie Manzo. “We look forward to announcing the next evolution of the Little Town brand in a vibrant and exciting part of town,” Chris adds.

Let’s check it out!
JCG 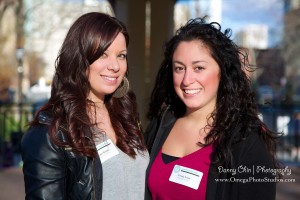 The Jersey City culinary food scene is off the charts, and what better way to experience it than to enjoy a variety of cuisines from different venues—all at one reasonable price, and all in one day or one night?

Jersey Girls Food Tours (JGFT) showcase the gastronomic scene in Jersey City, perfect for locals and non-locals alike. Guests can enjoy YUMzzz from the best eateries in town and get a dose of JC history while walking from spot to spot.

My gals Janis Borroto and Alessia Aron (pictured from left to right, above) of JGFT invited me on a test run of one of their new Jersey City tours, titled “Best of Downtown.” 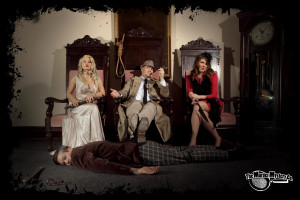 The Murder Mystery Company hosts dinner parties with a case to solve, and one of their regular spots is in Jersey City. A curious person and complete newbie to interactive dinner theater, I jumped at the chance to attend one of MMC’s shows at Sanai’s (510 Summit Ave.) earlier this month.

I was in for quite the experience. First, detectives, you must sign up in advance via their website, grimprov.com. Tickets include a 3-course dinner (bevvies and gratuity not included) and the very interactive murder mystery show from “the nation’s most popular interactive theater company.”

Once you book your party, you’ll receive your theme. Mine was “Wanted, Dead or Alive!,” a whodunnit set in 1887. Members of the audience are encouraged to dress up—and there is even a costume contest at the end. Immediately, I needed to get some attire. A couple of cowboy shirts, hats, bandanas and boots later, my date and I were ready to go.

I’m not sure how I’ve never heard about the popularity of mystery dinner parties in JC—the restaurant was jam-packed with cowboys, cowgirls, saloon gals, Native Americans, and serious duster jackets and hats on townsmen. 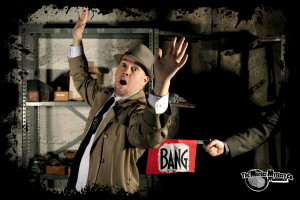 Actors are hired to perform for the show, and all audience members are labeled as detectives. You are seated at a table of 8-10, and your table serves as your team for the evening. Ours was the smallest 6 people, as some had canceled, so we were immediately at a disadvantage, but I was there for the experience and not in it to win it. (Sorry, mates!)

The two-hour interactive event was nothing if not intense. It’s an entertaining mix of actors performing scenes and providing monologues, guests discussing clues with their tables about suspects, guests dividing and going to other tables individually to bribe actors (with fake money) for more clues, reconvening, eating a bite here or there (note: Sanai’s was good and I will def be back on a regular night to review it), hearing more monologues, evidence, and repeating the cycle of gathering clues and reconvening.

The wild, suspensful, involved extravaganza is a bit much for a first-timer trying to keep track of information overload and all of the 120 or so people there. I found it hard to hear the evidence and clues because of audience noise. Additionally, one woman in our group wanted to take complete control of our investigation (fine with me, not so fine with some of our other team members who traveled from far-away towns and wanted more input). 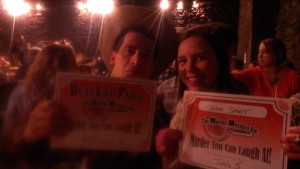 At the end of the evening, all teams proposed their final verdicts and handed slips of paper to the announcer. At first, my group was led to believe we solved the mystery, but then that told our conclusion was so outlandishly off. However, we were so outgoing that we won the award for Team Spirit! That’s the best award, anyway.

Several other awards were handed out (including the best costume one) and then as our table settled the tip and ate dessert, we finally had some time to talk on a personal level. I love meeting new people. All in all, it was a crazy night and I’d totally do it again.

Tickets are $60 each, but I happen to have a giveaway. Two free tickets for the best comment on this article about why you deserve to go!

Have a killer time,
JCG

The Merchant is super quiet during lunch and often pretty hopping during dinner. Both atmospheres have their advantages if you are in one of those moods.

Last week, I took out my boyfriend for a quiet and late (3pm) lunch. We were the only people in the restaurant, but it was cool (it was 90 degrees outside), quiet, and nice to have the place to ourselves. Service was perfectly timed—not too rushed (we are European)—and not too slow. They were attentive in keeping our glasses full and checking on us every now and then, but not intrusive at all.

My date got the short-rib burger, a $15 monstrosity of glorious meat topped with horseradish chive cheddar, bourbon bacon, beer-friend onions, and LT. He chose to have cheese added to his fries. I watched in awe as his 6-ft 148 pound body cleaned the plate. It was that good. 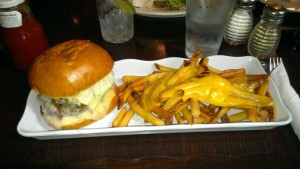 I was enticed by the bbq duck quesadilla, but eventually decided on the pan-seared rare tuna wrap, mixed with asian-style vegetables and dressed with teriyaki sauce and wasabi mayonnaise and comes with a side salad. I could only get through half of it. Tuna was maybe not as rare (or juicy?) as I liked and I thought the flavor a little bland…maybe not enough of the dressing/condiments. 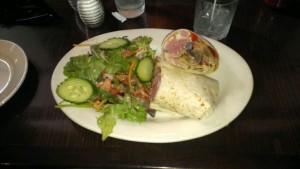 We were both in a food coma walking out. The hearty portions left no room for dessert, even though the deep-fried Snickers looks like it’s worth a try. Next time.

On a previous lunch date, I sat outside (great for people watching). My friend and I ordered the steak wrap to split (with onions, goat cheese and horseradish), which was plenty of food per person—even really hungry people—on a warm July day. We were spending the rest of the afternoon outside, and you never want to get into a food coma when you’re susceptible to a heat one. I don’t even think I finished my half in fear I’d get sluggish, even though I walked in hungry.

Dinner here is always more impressive than it seems it will be. The bar is fairly scene-y, the lighting is just right, and the service is usually spot-on in attentiveness. I’ve tried a variety of things here for dinner. My favorite meal would be a shared appetizer of “bang bang” shrimp to start, then the warm goat cheese salad with apples in raspberry vinaigrette, and sea scallops (pan roasted with truffle butter) served with broccoli rabe for an entree. I tried my companion’s filet mignon, which was flavored and cooked to perfection, everything a carnivore would like in a good piece of meat.

When you’re jonesing for a well-made drink and a sophisticated bar crowd, going here for cocktails won’t disappoint. There are happy hour specials every night of the week, too, and on weekends, drink specials last all night long.

I have yet to have brunch here, but feel free to comment here or email me: jerseycitygia@gmail.com about your experience at The Merchant.