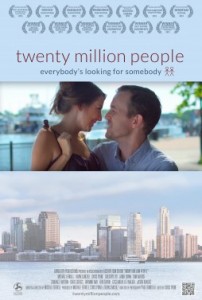 Twenty Million People is a contemporary take on the romantic comedy, and was shot primarily in Jersey City by filmmaker Michael Ferrell, a Grove St. area resident.

In the 90’s indie hit Swingers, we pondered how many days we were supposed to wait before we call. In Twenty Million People it’s how many minutes should we wait before we text back, because you don’t want it to seem like you were just standing here with the phone in your hand. And oh yeah, “everything you text has to have an exclamation point or it sounds sarcastic.”