Wyland Performing at The Citizen 3/26 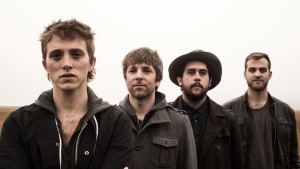 New Jersey-based band Wyland is performing at The Citizen (332 Second Street) this Saturday 3/26 at 7pm to celebrate the release of their new EP In A Sea of Things Unsaid. Supporting acts include Hey Anna, Bounders, and Cold Weather Company, and the cover is a mere $10.

Wyland was founded in New Jersey, and this will be their first concert here after arriving home from SXSW. I caught up with Ryan Sloan to get the low-down on the band and the sound. Back in 2014, Ryan had written songs using his piano and guitar but knew the types of instrumental sound he needed to make the music come alive. He first posted an ad on craigslist to find a guitarist.

Enter Mauricio Salazer, who moved from California to NJ to attend Montclair State University for his Masters in Music Therapy. Mauricio needed an outlet from his classical studies and was looking for a band to jam with on his electric guitar. He and Ryan were a creative match and started working together on the music.

Soon, Ryan found drummer Richard Joyce via Facebook. While neither one of them recalls how they were “Facebook friends,” the site led to how they eventually connected in person, when Mauricio and Ryan went to one of Richard’s shows. The Wyland duo later recruited Richard after having a fallout with their unnamed drummer, needing to fill the void for their already booked shows.

One of those shows was in Syracuse. Another band playing caught the guys’ attention, specifically base player Zach Calidonna. As fate would have it, Zach reached out to Wyland when his band broke up last year and pitched himself. The group spent two weeks going over their collection of songs with Zach and then began recording at Lakehouse Studios in Asbury Park. “You can all see each other and play off of one another,” enthused Ryan about the studios. “After recording, we went out drinking to celebrate and convinced Zach to move down here from upstate New York.” Zach was in Jersey within two months. (Side note: He and Ryan both do electrical work for the same company as their day jobs. Richard, like Mauricio, has a career in music therapy. It’s not all glitz and glamour; artists still have to work.)

As for the sound, Ryan says that Wyland aims to be an alternative to standard pop. “We want to be catchy without being overly repetitive and annoying.” The band has been compared to Coldplay and U2. “We take that as a compliment as it means we’re moving in the right direction of where we want to go with our sound. As long as it doesn’t mean we’re a ‘ripoff’ band.'” Those two bands were ones that the guys grew up listening to, along with The Police, Travis, Elbow, Radiohead, and other classic rock bands. Notes Ryan, “Their music is timeless because of their sound, and that’s what we’re going for.”

Ryan claims he is “like a coffee shop type of guy when it comes to writing the music, but the guys take it and put it in an arena. I think if you have a great song, that it can be performed in any genre.” (This must be why I love acoustic pop covers or folk songs turned into EDM.)

The band has performed at The Citizen before. “We liked the vibe and it was cool. For bands, if we can, it’s our duty to keep that [type of] music scene alive in Hoboken and Jersey City.”

The release show is, again, the group’s first show in their native state since their time spent in Texas at SXSW (which was wild, btw: a 26-hour drive, three shows a day, six hours of sleep total, and a new friendship with Randy Jackson.)

Get ready for the show by listening to some of their tracks here.