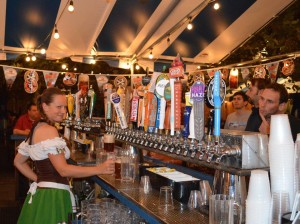 On September 26th Zeppelin Hall kicked off a month-long celebration, where they’re serving Oktoberfest-approved beers such as Stammwurze, Hofbrau, Paulaner, Spatenbrau, and Hacker-Pschorr-Brau on top of the 50 European and American craft beers already available on tap. And what goes better with German beer than traditional bavarian dishes such as Schweinhaxe (pork shank) and Goulash over Spaetzle? Regional sausages and pretzels imported from Munich, Germany (where Oktoberfest originated) will also be on the menu.

German party bands will play at 10pm on weekends, with Die Spitzabaum and The Adlers being featured heavily.