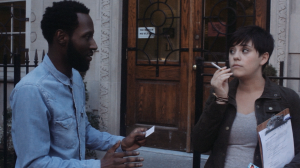 Chris Celestin, an indie filmmaker and founder of Fixed Signs Productions (based out of Jersey City) debuts his new film “Ambition” at Anthology Film Archives in NYC on Saturday, April 5th at 8PM. The 45-minute film is about a young man struggling to keep his younger sister from falling into the foster system, while selfishly pursuing his ambition to become a film actor.

The premiere will be followed by a Q & A with the cast and crew.

To the artist’s hustle,
JCG