LITM hosts a summer dance party and barbecue this Wednesday, June 21 from 7pm – 1am.

Chilltown Get Down is a grown-up block party on Pedestrian Plaza outside of 140 Newark Ave., aka LITM (“Love Is The Message”).

The restaurant, bar and art gallery is serving frosé and spiked ice pops to temper the heat, and a special BBQ menu by Chef Eduardo Rugerio.

Dance off the cals to old R&B and hip-hop favorites spun by DJ George Soul Fernandez.

Admission is free; food/bevvies are not.

Jersey Girls Food Tours is participating in The Start Something Challenge of 2017. Shout out to Alessia Aron and Janis Borroto – the girl bosses behind the brand. Check out the JGFT promo video to get them to the next round, and check back here when voting begins on July 14. 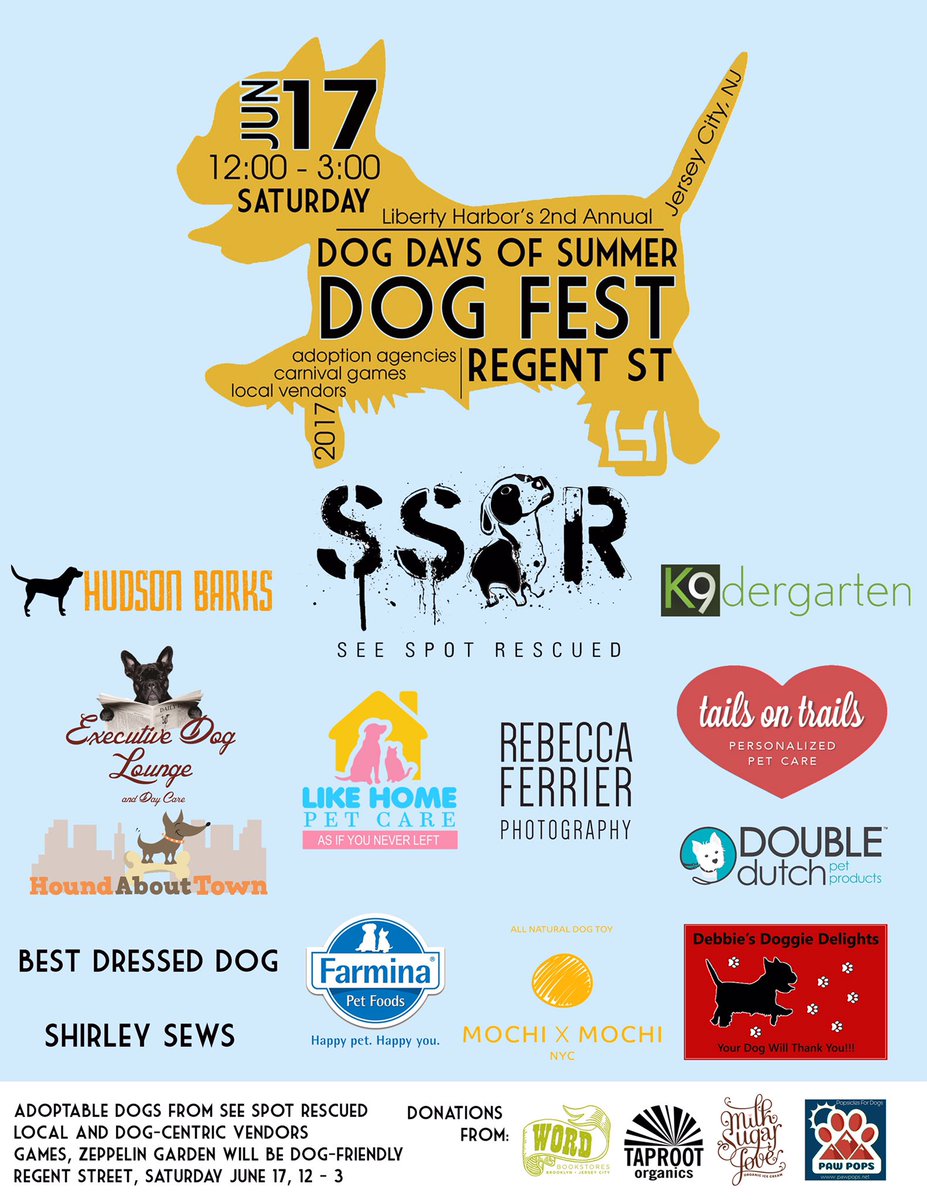 The Second Annual Dog Days of Summer Dog Fest of Jersey City is on and poopin’ 😉 this Saturday, June 17 at Liberty Harbor.

From 12-3pm at 50 Regent St. in Jersey City, enjoy fun & sun with your best friend(s). For humans without one, you can adopt from See Spot Rescued, and for those who have already adopted, pamper your pooch with gifts and goodies!

Hidden Hymns is an evening of Modern Dance by Meagan Woods & Company set to live original music by Shayfer James – and it all goes down at the 407 Theater-County Prep HS (525 Montgomery Ave.) this Saturday, June 17th at 7pm.

Meagan wanted to create a night with dance at the forefront, a show to highlight professional dancers, feature students, and honor a true coming together of friends and dedicated collaborators, such as Shayfer, who she’s worked with throughout the years.

“I can feel something building, something really meaningful,” says Meagan of choreographing and rehearsing these six dances, with a collective cast of 21 dancers.

Tickets are $15/general; $6/students. Purchase online here. You can also pay at the door, but door tickets are cash only.

Meagan Woods & Company can use your support to continue bringing arts programs to the community. Think: costumes, lighting, sound, rehearsal space & venue rentals, professional musicians and dancers, and so much more that goes into making these shows possible. You can donate to the cause here, and your gift is tax deductible.

To the arts,
JCG

Beat Street – a hot new restaurant occupying a portion of the v. cool Transmission space at 150 Bay St. – is gaining a lot of buzz in Jersey City.

If you haven’t read up on it yet, or just want to know more, here you go.

Let’s start with their pre-opening on Wednesday, June 14. Rather than just, say, have a soft-launch open, Beat Street’s “sneak peek” is a benefit for Big Brothers Big Sisters. The cocktail party will feature several musical acts, and there will be an open bar and passed hors d’oeuvres, as the full kitchen is not open yet.

Then, when the restaurant officially opens on Thursday, June 22, there will be a pay-what-you-want fundraiser, with all proceeds from the evening going to The Sharing Place Food Pantry at St. Paul’s Lutheran Church. (Stay tuned for my recap!)

Here’s the story behind the conception: Howard Brunner, the man behind Transmission, the 5,000 sq.ft 2-yr.-old nightclub, wanted to evolve the environment into a “multi-sensory experience.” So he partnered with nightlife curator KC Macias and celebrated chef Darryl Harmon to open Beat Street, a 100-seat restaurant, bar, lounge and performance space within.

The name Beat Street is a tribute to the 1984 movie of the same name, so the entire inspo is breakdancing, DJ’ing and graffiti. Think: street art, street food, street music. But a little more upscale. Brunner explains, “It’s a juxtaposition of gritty street life with high-end touches that truly makes it a distinctive experience.” How Jersey City is that, for you?!

Decor is getting its final touches now by Ivan Orama, a New York City artist known not only for murals, but handmade furniture, like this Wu-Tang Clan table, which is a replica of an old-school cassette tape.

His client list is impressive, so I’ll let that speak for itself. And the work at the restaurant in progress… 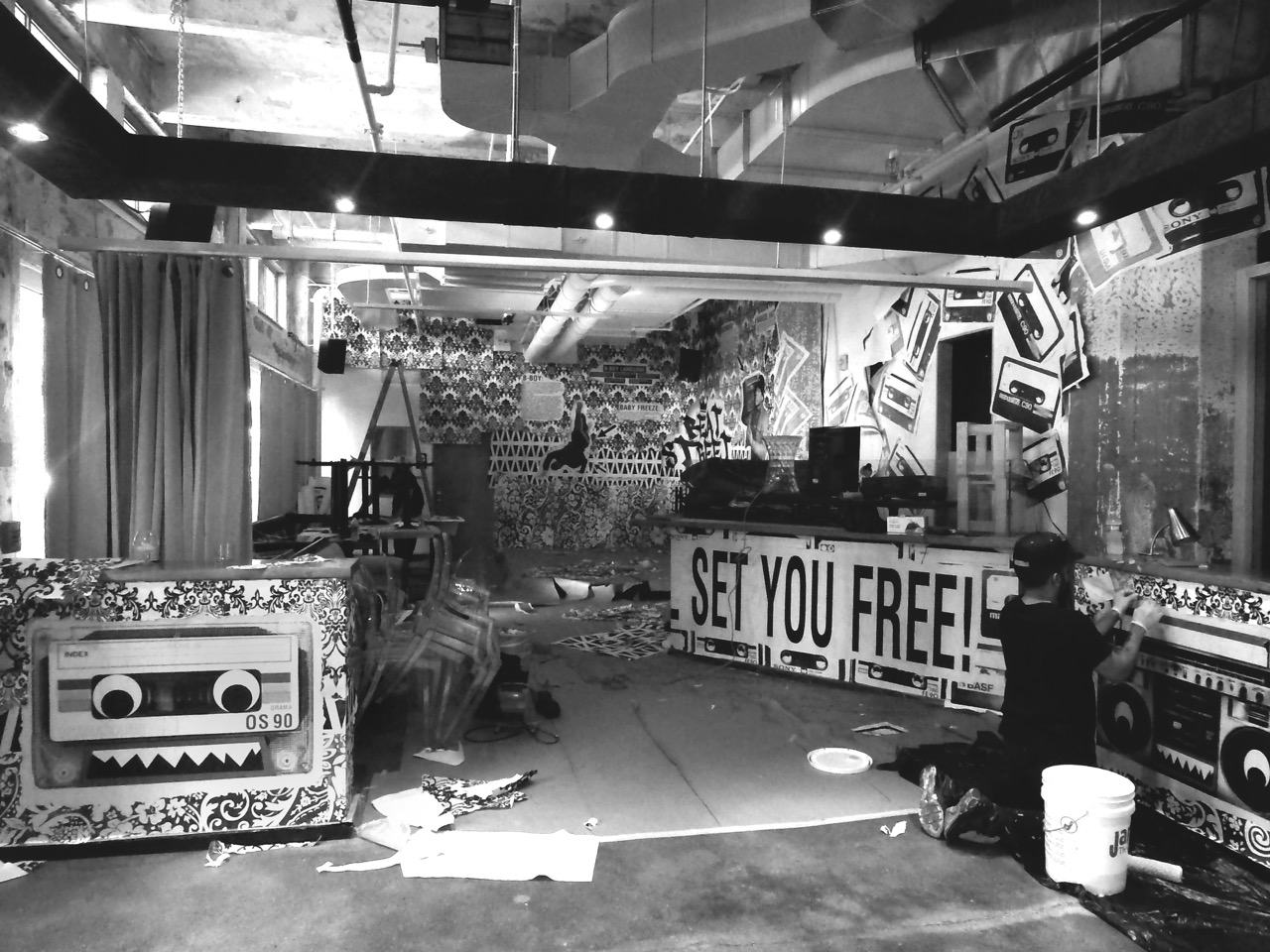 Beat Street will feature a bar, a lounge (with a grand piano!), a dining room, and later, will have wrap-around outdoor seating space. Darryl Harmon, the chef (who also has an impressive list of clientele), is “excited to see guests’ reactions” to the menu. He’s using the street food theme to “get real funky,” which has resulted in the Rocka Falafel Waffle, a combination of pressed falafel and waffle with mint frozen yogurt, Harissa infused syrup, Raita and micro borage.

All of the menu foods are experimental takes on the familiar, and each dish has a very specific way of being presented: Nachos are Frito-based and served pouring out of a Frito chips bag,  A Sloppy Joe will arrive in a custom graffiti lunchbox (no two are alike) with other fun items like a liquid-nitrogen powered root beer float, and you may get a mini trash can or a street cart as your food’s delivery vessel depending on your order. The serving aspect “will be quite a show.” says Harmon.

As for the vibe, KC Macias, who has yet another impressive track record, will bring an eclectic mix of live music to Beat Street, encompassing all genres. “I’m talking about raw, street music, including salsa you would hear in the streets of Havana, and jazz that you’d hear off of Bourbon Street” he says, but emphasizes that Beat Street is welcoming, “like you’re in your living room being entertained in a cool way.”

Beat Street will be open from 5-11pm, Tuesday – Saturday, starting on June 22.

I can’t wait to check it out! Check back here after the opening for my experience at Beat Street.

Get ready: The Matriarch flies in tomorrow! #Chris

@mr_mustart is back on the block 🙌 #streetart #

...and the matriarch ended the terror with the tos

You can be older than time, and never get old #wa

From Easter to Easter: A Year in Family Photos Ga