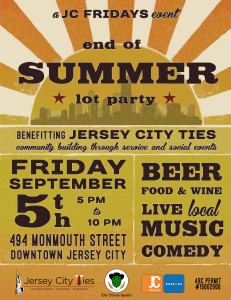 As part of JC Fridays, Jersey City Ties and The Thirsty Quaker, will be hosting an evening of local music & comedy, as well as beer, wine, and food from 6-10pm on Friday, September 5th.

The lot party is located at 494 Monmouth Street (between 8th St. and Pavonia) in Downtown JC. Proceeds will help support Jersey City Ties in its mission of community building and networking through service and social events.This event is free to attend, with an entertainment lineup including: Tucker Janisch, Jon’s Banjo Jug Band, Darren Deicide, and National Scandal sketch comedy (lineup is subject to change). Drinks and food will be available for purchase. Jersey City Ties will be selling select beer and wine to benefit their cause, and The Lamp Post Bar & Grille will be selling food.More information about the event can be found here.

Celebrate in the streets!
JCG