Jersey City kicks of Cinco de Mayo early with a parade on Friday, May 2nd that will take over Grove between Grand and Montgomery from 4pm until midnight.

As part of the celebration recognizing the Mexicans’ victory at the Battle of Puebla, the New Jersey Beer Co. will be serving margaritas and beer, and The Taco Truck and El Chilango Taqueria will be serving up Mexican eats. Way to kick off the weekend! 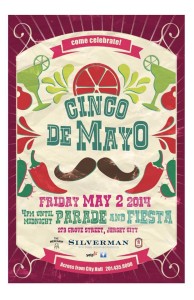 My time-honored tradition is to celebrate Cinco de Mayo at Hard Grove Cafe, (I know it’s Cuban but their margaritas pack a punch and I love their taco trio,) but since Jersey City is making a weekend out of it, I may salute at Orale! Mexican Kitchen on the actual day. Other places that come to mind are Taqueria, Boca Grande, Blue Moon Mexican Cafe, and let’s not forget the excellent brick-and-mortar Cinco de Mayo on Central Ave.