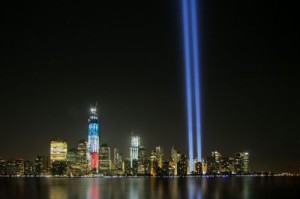 I was sitting in class my freshmen year at NYU, and a loud noise sounded. “Damn that construction,” my teacher cursed. We had yet to realize what that noise really was.

When I left the building, people seemed frantic outside. I bumped into a friend who pointed at the sky and said “Look!”

I looked. I’ll never forget that image. What a beautiful blue-skied day, those towers shining like crystal when I walked to class, and what a burning mess it was now. Debris and un-breathable air.

That smell still stings. I began walking up Fifth Avenue to my dorm in a state of shock. My street had already been shut down, news and radio vans were everywhere, people were everywhere. Firefighters, police and the military populated the street.

Still confused, I pulled out my cell phone to call someone, but it was inoperable (I soon found out my land line was too; I had no way to talk to my parents). I walked to my dorm and watched TV with my roommates, the story slowly unraveling. We later waited on line for three hours to donate blood. We had no words.

Time went on in that haze, our city becoming a ghost town. Classes were canceled. Stores and businesses shut down. The only sounds we heard for the next week were sirens and helicopters, as our street was still closed off to cars.  We glued ourselves to the TV, volunteered, helped out strangers and attended numerous candlelight vigils, trying to grasp what had happened.

All of the crazy chaos that followed that day, week and months afterward is still as crystal clear in my mind as it was twelve years ago, the day that the world changed forever.

Reflect, remember and be generous to your fellow citizens today.

Surf City: Movies On The Beach