Shakespeare in the Park Tomorrow 8/14 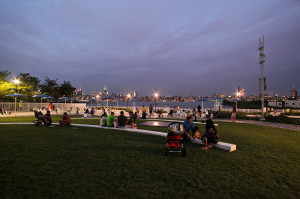 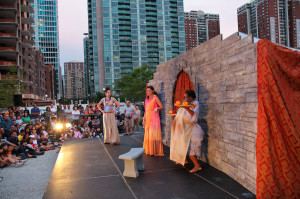 (pictures from last year’s “Comedy of Errors,” taken by Mark Wyville for the Newport Development team)

On Wednesday, August 14th, Hip to Hip Theatre Company presents Shakespeare in the Park. After much success last year, they return by demand this summer at Newport Green performing “The Tempest” at 7:30pm. For those of you who don’t know, Newport Green is a cozy green oasis/beach tucked away in Jersey City on the Hudson River overlooking the Manhattan Skyline. I stopped by last week on my walk home from downtown, and attended this cool family-friendly event in late July.

Shakespeare in the Park is also and has always been family-friendly, but this year, Hip to Hip will be offering a children’s program called “Kids & the Classics.” Show up thirty minutes before the performance, and company members will engage children of all ages in theater games, teach them the tenets of ensemble playing and introduce them to the elements of theater (script, scenery, lighting, makeup, costumes and acting). The kids will get excited about William Shakespeare’s plays and, as an added bonus, learn about audience etiquette as well.

“The Tempest” synopsis: After twelve years on a deserted island, a deposed Duke is now a mighty sorcerer. He raises a storm at sea, bringing within his grasp the enemies who robbed him of his dukedom. Shakespeare’s final masterpiece has it all: a shipwreck, conspiracy, magic, monsters, fairies, and love at first sight.