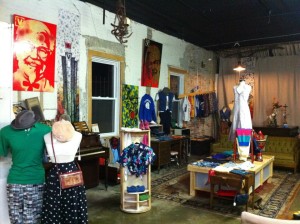 This Saturday, September 21st, is the all-out awesome All About Downtown Street Fair.

Stroll up or down Newark Avenue (between Grove St. and Jersey Ave.) to soak up live music, nosh on noms, sip adult bevvies, and shop from 11am-6pm. There will be over 100 local vendors, and plenty of fun activities for the kids, too.

In August, I was invited to a networking event for the Meetup group titled “The Downtown Jersey City Business Networking Group.” Frank Petronella, who will soon be opening a State Farm agency in the area, created the group as a way to get other local professionals together on a monthly basis to share tips, strategies, and not only promote their own initiatives but to connect and do business with others.

While this was only their second event, I found that most attendees had been to the previous month’s meetup, and many of them had worked together after that. When we went around the room to introduce ourselves, lots of people put in plugs for other business owners and professionals who were present.

This is just the kind of network we need here in Jersey City. DJCBNG “encourages business owners, entrepreneurs and professionals to build and maintain lasting relationships with other professionals in our community.”

The next event will be this Thursday, September 12th at Serenity Day Spa (263 Grand St.), which is owned by energetic and enthusiastic member Diane, so expect a great night of networking.

Link over to the site’s page to join us!

Oh, and feel free to invite others in the neighborhood who you think will benefit from this group.