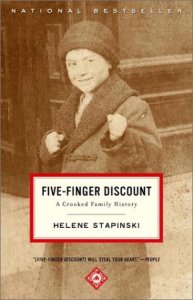 “Five-Finger Discount” is a documentary based on the national bestselling memoir about Jersey City by Helene Stapinski.

The saga chronicles the journey of a family – and of Jersey City itself – from a criminal and corrupt past to a reinvented and revitalized present, told from the unique perspective of a working-class woman who lived it.

You can learn more about the film, the book on which it’s based, and even see a short video sample here. Help them make this documentary a possibility by donating to their Kickstarter campaign here.

To the JC Arts,
JCG